The Women’s Land Army was first formed in 1917 to train women in agricultural skills and by 1943, 80,000 women were serving in it, helping to produce 70% of Britain’s food while many farmworkers were fighting in the war. 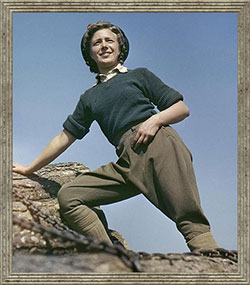 The Women’s Land Army (WLA), colloquially known as the Land Girls, re-formed at the outbreak of World War II to work on the land, freeing the male workers to go to war. With the outbreak of peace the WLA remained in existence doing vital jobs on the land until demobilisation was complete.  The WLA was formally disbanded in 1950. Land Girls’ work included: milking cows, digging ditches, mucking out livestock or sawing timber. The work was hard and outdoors in all weathers.  What they wore varied, but it was all practical and hard-wearing. Some wore wellington boots and others had sturdy shoes. Some wore corduroy trousers and others had overalls. They wore cotton shirts with a green tie and a green jumper. All had a thick working coat. They wore a smart felt hat (with the W.L.A badge pinned on) when they were wearing their smart overcoat on parade, but while working they would wear their hair tied up in a scarf, to keep it out of the way of farm machinery. They were only paid £1 2s a week after paying board and lodgings. Lawn and Order female gardeners in Coventry are proud to be continuing this tradition.

Some of our projects

This website uses cookies to improve your experience while you navigate through the website. Out of these, the cookies that are categorized as necessary are stored on your browser as they are essential for the working of basic functionalities of the website. We also use third-party cookies that help us analyze and understand how you use this website. These cookies will be stored in your browser only with your consent. You also have the option to opt-out of these cookies. But opting out of some of these cookies may affect your browsing experience.
Necessary Always Enabled

Any cookies that may not be particularly necessary for the website to function and is used specifically to collect user personal data via analytics, ads, other embedded contents are termed as non-necessary cookies. It is mandatory to procure user consent prior to running these cookies on your website.